Solar sharing in Japan, the agrivoltaics

Solar sharing in Japan, the agrivoltaics

Posted at 09:15h in Blog by Solaracks 0 Comments

Farmers in Japan can  generate solar electricity while growing crops on the same farmland. In April of 2013, the Ministry of Agriculture, Forestry and Fisheries (MAFF) approved the installation of PV systems on existing crop-producing farmland. Previously solar generation on farmland, productive or idle, was prohibited under the Agricultural Land Act.

This co-existence or double-generation is known as “Solar Sharing” in Japan. The concept was originally developed by Akira Nagashima in 2004, who was a retired agricultural machinery engineer who later studied biology and learned the “light saturation point.” The rate of photosynthesis increases as the irradiance level is increased; however at one point, any further increase in the amount of light that strikes the plant does not cause any increase to the rate of photosynthesis.

By knowing that too much sun won’t help further growth of plants, Nagashima came up with the idea to combine PV systems and farming. He devised and originally patented special structure, which is much like a pergola in a garden. He created a couple of testing fields with different shading rates and different crops. The structures he created are made of pipes and rows of PV panels, which are arranged with certain intervals to allow enough sunlight to hit the ground for photosynthesis. 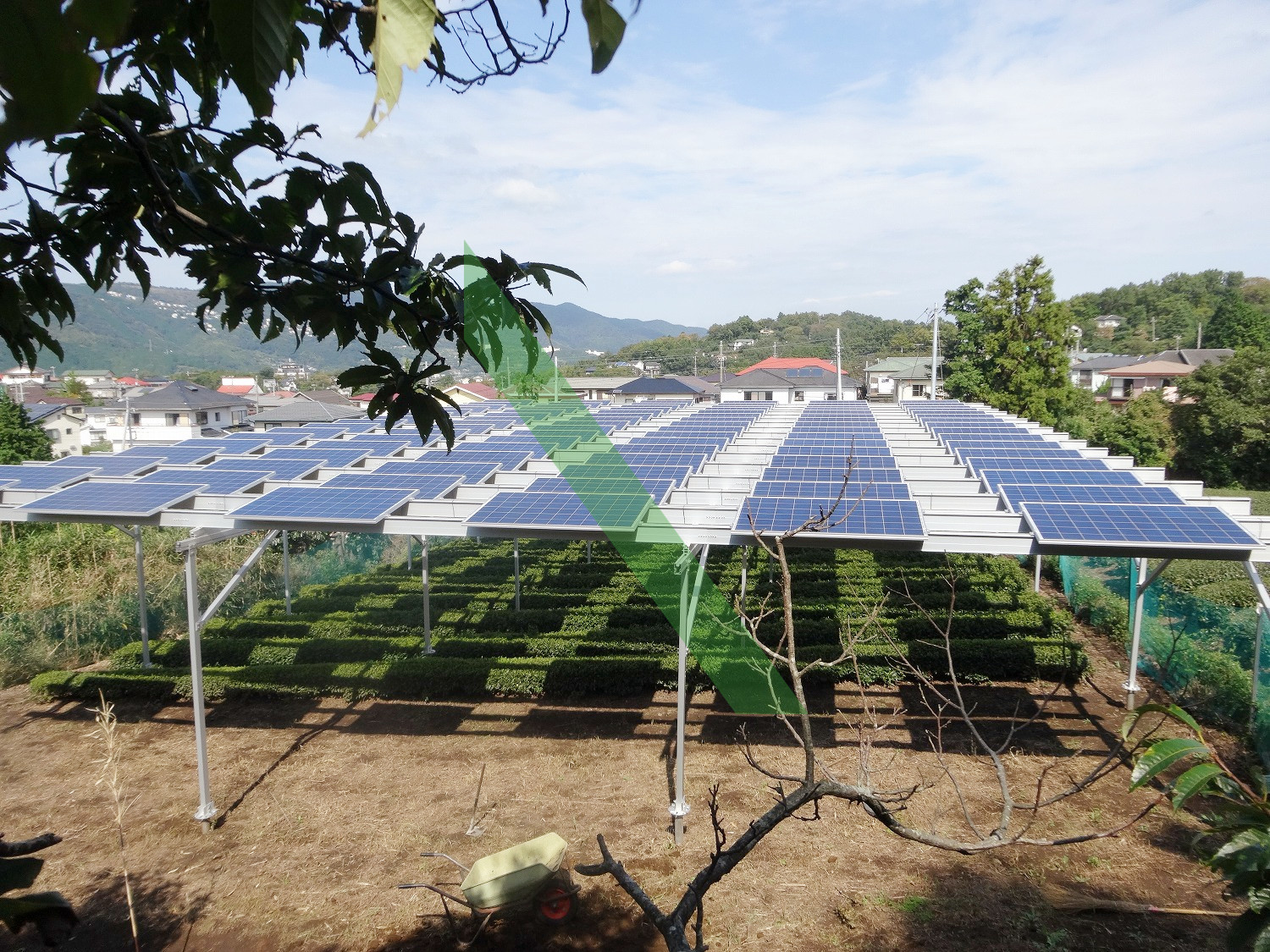 At first glance, the structure may seem to be rather “skimpy.” One of reasons is the MAFA requires that PV systems have a simple structure (without concrete footings) and should be easily dismantled. MAFA also requires that PV mounting structures must be designed and built to secure adequate sunlight for crops and space for agricultural machinery to be able to move around.

However, Nagashima said that the point of these guidelines are for farmers to remain “farming” and prevent farmers from fully converting productive farmland to solar facilities. Based on the tests conducted at his solar testing sites in Chiba Prefecture, he recommends about 32% shading rate for a farmland space to reach adequate growth of crops. In other words, there is twice as much empty space for each PV module installed. To ensure continuous farming, municipal agricultural committees require farmers to report annual amounts of cultivation and demand to take down the PV system from the land if the amount of crops cultivated on the solar shared farmland gets reduced by more than 20%, compared to the pre-PV installation.

“The solar sharing can re-activate the declining farming sector,” said Makoto Takazawa, the owner of the 34.4-kW Kazusatsurumai Solar Sharing Project (Figure 2) in Chiba Prefecture. This is the first project in the nation to take advantage of the FIT scheme. Farmers in Japan are facing serious issues such as reduction in farming revenues and subsequently lack of successors. Many small farmers are forced to get a second job to sustain their living. Takazawa learned the concept from Nagashima and found that the solar shared farming is a way to revitalize Japanese farmers, providing opportunities to increase income and contribute to the nation’s energy need.

Takazawa installed 348 PV panels on a small 750 square-meter of farmland. PV panels are installed on pipes, which are 3-meter high from the ground. Rows of PV panels are installed every 5 meters. Under the PV system, Takasawa’s father has been cultivating peanuts, yams, eggplants, cucumbers, tomatoes, and taros (Figure 3) and will cultivate cabbages during the winter. These vegetables are sold at a nearby street and consumed by his neighbors. 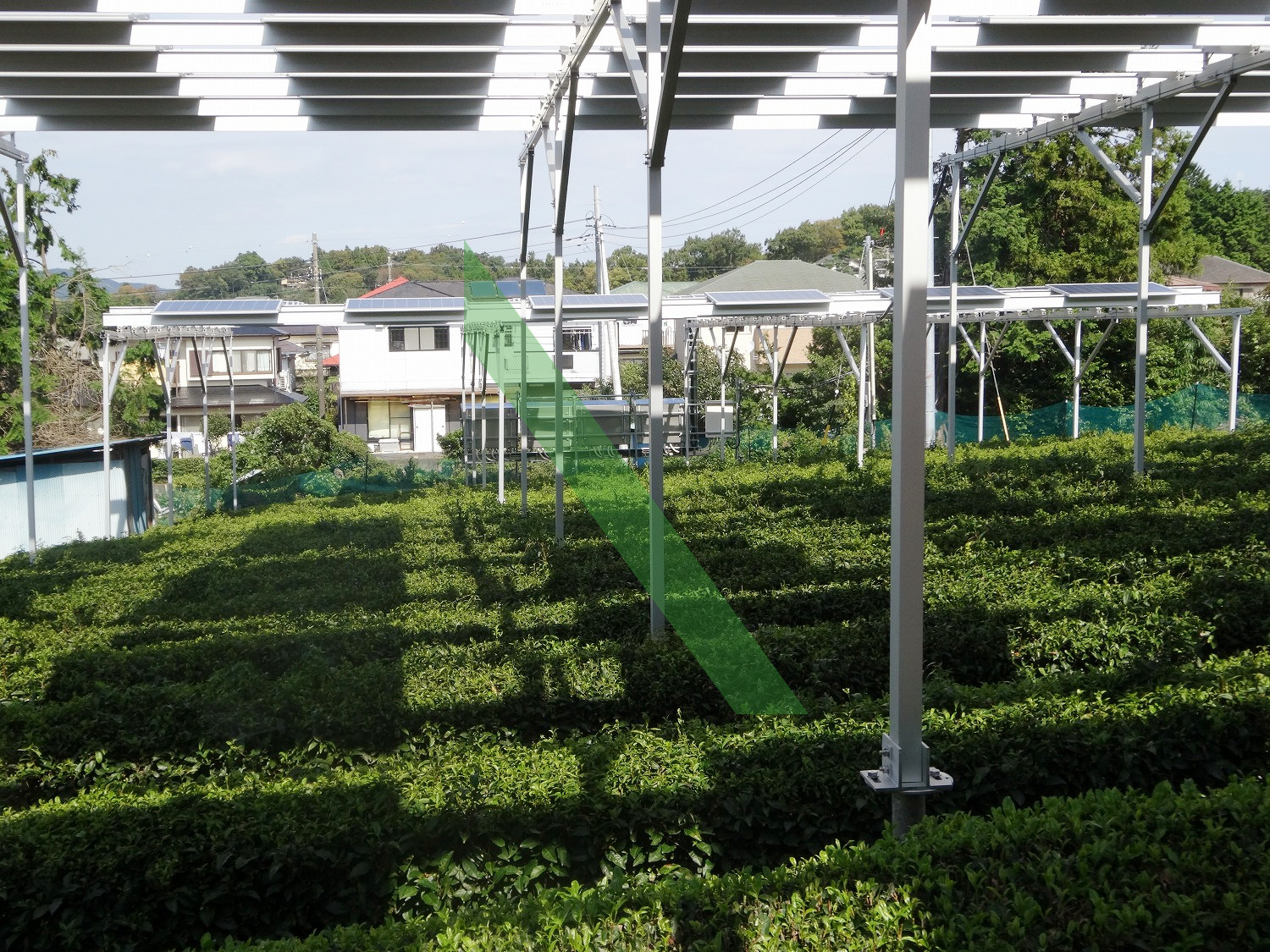 In Aichi Prefecture, Tsuboi has designed and self-built a 50-kW system over the growing citrus trees. About 600 PV panels are installed over 7.7 acres of the farmland are mounted on 5-meter high steel pipes. The type of citrus he is growing is called Dekobon, a Japanese hybrid of mandarin and orange. Since Dekobons are harvested under the PV system, he is selling them under the name “Solarbon.” Like many other farmers, Tsuboi also has another job besides farming. This year, he expects the PV system to bring ¥2.5 million (~$25,000) as an additional income.

Many have questioned stability and durability of the PV structure for solar shared family. Nagashima stated that his systems, which are made of thin pipes without concrete footings, even withstood strong winds and earthquakes during the Fukushima Tsunami disasters in 2011. These systems are extremely lightweight and installation of PV panels are spaced out, allowing air to flow through between the panels. This will eliminate concern that the panels will receive wind load and be blown away, therefore, reducing the need for complicated and expensive mounting hardware.

Nagashima suggests solar-shared farming for ranches in the U.S. He pointed out a few benefits of PV systems over grass on pasture: the PV system can provide shade for cattle or sheep to rest underneath and because of higher soil moisture level, the shading will reduce irrigation expenses.

For Japan, it will require about 2.5 million acres of land to supply Japan’s total electricity with PV. Under the solar shared family, it will take about 7 million acres of farmland to supply the same amount of electricity. Japan currently has over 11.3 million acres of available farmland. “Before the Industrial Revolutions, farmers provided both crops and energy (firewood and charcoal) to the society. The solar-shared farming makes again for farmers to provide two important products from nature and will revitalize the farming sector,” Nagashima stated.

Welcome to check with Solaracks team about solar shared mounting structure, we can provide design to certain land area.