Posted at 03:39h in Blog by Solaracks 0 Comments

Every time a commercial flat roof PV system is designed a decision to build facing South or East-West must be made. While everyone knows European solar systems will perform best facing South with a decent sized pitch, there are a number of other factors at play that influence the most profitable solution for a commercial PV system owner.

An east-west system in comparison to a regular south facing system, all that possible with our east-west mounting system:

An East-West system uses the available roof surface to an optimum and increases the capacity used substantially. This leads to a higher feed-in power throughout the year. With an East-West system the investments costs for each kWp are considerably lower than with a standard south oriented system. East-West systems are, thanks to a steadier yield curve during the day, a lot better than south-oriented systems in terms of private or commercial self-consumption. With this the self-consumption rate increases and maximizes the monetary earnings. 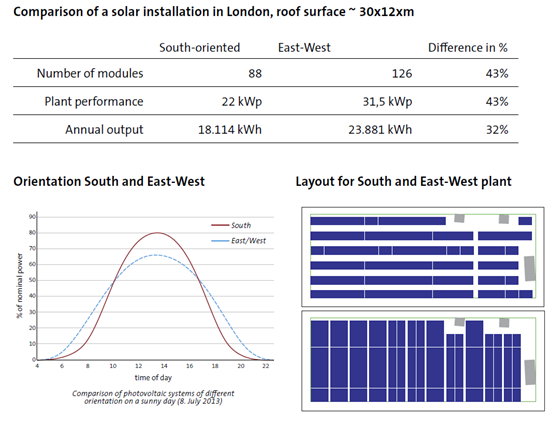 With an East-West system, you make the most efficient use of the mounting system. Since there is hardly any space between the modules, there is no redundant mounting to be installed. Due to its nature of back-to-back modules, an East-West system is less influenced by wind loads. They form a closed system within itself, without the need to provide wind deflectors like South facing modules would need. You can save up to 15% on the costs for mounting when using an East-West facing system.

Apart from using less material per installed module, it saves on the need for ballast as well. This saves costs and labor, but more important, it lowers the total weight of a system, especially for roofs above 10 meters height. This can play an important role in the decision, mostly for industrial buildings where load bearing capacity of existing structures can be limited.

NEXT: Notification of National Day-2022